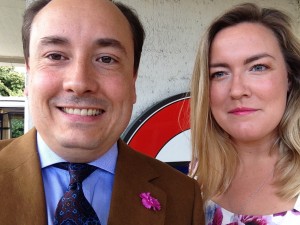 On Saturday, Steven and I were invited to Claridge’s penthouse to celebrate London Collection; Men’s week.

The invite stated that it was going to be a gentleman’s BBQ with hand rolled cigars and exquisite whiskies! Wei Koh, the founder of the Rake magazine has a marvellous talent for throwing engaging and beautiful parties, so we were very excited!

So, a quick selfie at the tube station (Photo above) to make sure we looked the part! The fuchsia carnation Steven is wearing was picked that day from our garden.

As we arrived, Luke Carby the charming photographer walked us into Claridge’s, all the while working his magic with his camera!

We were instantly fascinated by the cigar maker, who was staked out in the corner of the penthouse terrace. He was hand rolling cigars to order! We were hypnotised by his smoothing of the tobacco leaf, the careful slicing of the leaf and the quick dexterous rolling of the cigar. Who knew that there are so many stages!? I found myself wondering how one would go about becoming a cigar maker? Where is the application form for that?!! 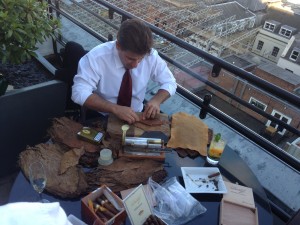 Steven’s father, John Hitchcock was also in attendance and it seems that Linen is the Hitchcock boys summer cloth of choice! Steven had his new tobacco colour linen suit on, while John had a royal blue linen sports coat with patch pockets. 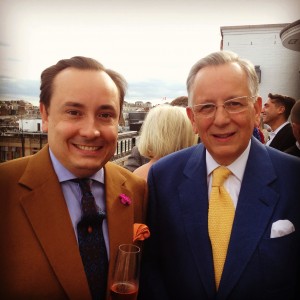 The party was wonderful, the people stylish, the cigar rolling dazzling, the whiskies heart stopping and Claridge’s as always was glamorous!