My father started off with a traditional apprenticeship, learning to make trousers in 1962 with trouser maker, Frank Naylor. His mother bought him a suit from the church jumble sale to wear to work. She told him that if he was going to work in London’s West End, then he must wear a suit! My mother, Margaret, also started working at Anderson and Sheppard in 1962, working for an Irish coat maker called Con. My mother and father met in the work room and married in 1970. I was born in 1974, and as a child I could remember my father bringing home trousers to make. On one occasion he brought home a rather large pair. My brother and I took it upon ourselves to stand inside either leg! 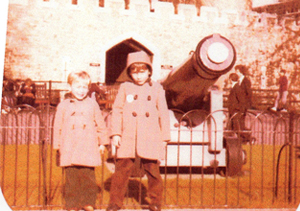 My younger brother and I wearing our bespoke duffel coats and trousers made by my mother and father.

After many years of being a trouser maker my father was invited to leave the work room and join the cutting fraternity, to be a coat cutter. He was taught by Mr Bryant the most stylish cutter Anderson and Sheppard had. John was taught how to cut and was influenced by Mr Bryant’s elegant way of dressing. Mr Bryant coined the phrase, ‘thoroughbred’ when he selected who he wanted to pass on his tailoring knowledge. The term was to describe the new cutters coming up the ranks who had started as apprentice’s in the work rooms and made it to the cutting room. Mr Bryant only wanted the best who had only worked for Anderson and Sheppard, and no one else. My father often tells me about the day that Mr Bryant told him with a stern face, ” If I am to teach you, you have to promise to stay at Anderson and Sheppard.” To be invited as a cutter, was very much an important leap in career terms. It meant that your fellow cutters had been watching you work and considered you to have the skill to adapt to being a cutter. I remember my father being very proud of this achievement, and when I used to visit him at Anderson and Sheppard in the school holidays, he would invite me to cut along his chalk lines. Even from the age of 10, my father was encouraging me to become a tailor!

My father was made a director of the company in 1983 as well as being introduced to HRH Prince of Wales. In 1989 John Hitchcock was made the sole bearer of the Royal warrant. This cemented his already long standing loyalty to Anderson and Sheppard. I remember my mother and father attending their first Buckingham Palace garden party, as my mother picked me up from Scout camp still dressed in her party dress! My friends thought she was very glamorous! 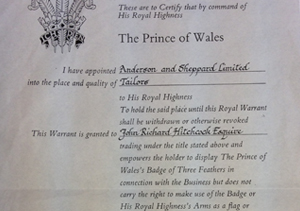 A copy of the Royal Warrant given to John Hitchcock. 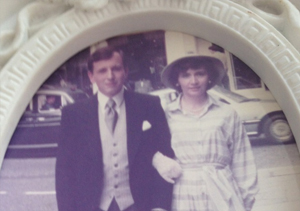 My mother and father on their way to their first Buckingham Palace garden party. Aged about 35.

I was always aware of my father’s profession, but did not understand exactly what he did. He had as it seems decided, that I would be interested in tailoring if I knew more of what being a tailor meant. He organised for me to spend a day in the work room of Anderson and Sheppard. I was put under the watchful eye of one of the trouser makers, Michael Arter. He still works there to this day! As that day progressed I became more and more enticed with tailoring and London. I remember going for a walk at lunch time with one of the coat makers, and he showed me Piccadilly. I couldn’t believe the bustle and the lights! As we walked back to Anderson and Sheppard, there was a noisy crowd of paparazzi on Savile Row trying to snap Elton John. I knew then that London was the place for me and that being a bespoke tailor was going to be my career.

One week later in 1990, I was fully employed as an apprentice coat maker at Anderson and Sheppard. I was expected to learn to make a coat in 4 years. I was apprenticed to Patrick Davey, a generous Irish coat maker. I achieved the goal of becoming an accomplished coat maker in the allotted 4 years. My progress was noted by the cutters, just as my father’s was when he was an apprentice. Mr Halsey the managing director approached me and asked me to consider becoming a cutter, just as my father had been approached all those years ago. I said yes! 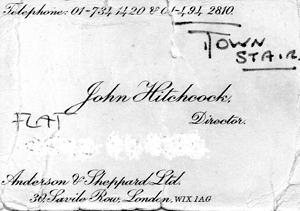 My fathers business card, he gave me on my first day of work at Anderson and Sheppard. 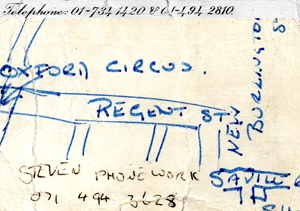 The map my father drew on the back of his business card, to make sure I knew my way to work!

I now joined my father John, in the cutting room. I was watching him progress as he was watching me progress in the cutting room. I remember being in the fitting room with one of his notable shoe designer clients, and was promptly told that, “your father is the best trouser cutter in the world.” This drove me on to want my own clients to speak so highly of my work. In 2003 my father was made managing director. By this time I had left Anderson and Sheppard, to set up my own bespoke tailoring business in 1999. I left because I had a vision of what I wanted to make and to build my own prestigious bespoke tailoring company.

My father’s retirement has been well earned; he has made suits for the very rich and the very famous, film actors, members of different Royal families, musicians, and fashion designers. I know he has enjoyed every minute meeting all of them and making friends all over the world. Clients came to Anderson and Sheppard to see Mr. John Hitchcock; he will be missed by his clients, fellow cutters, tailors and apprentices. My father’s loyalty, his unbroken promise to Mr Bryant, his work ethic and rise to fame is inspiring to me and is the inspiration that keeps driving me on to become better, to improve myself and to create beautiful clothes. 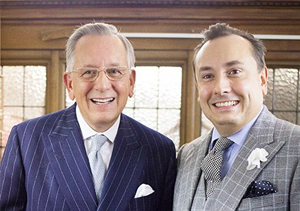