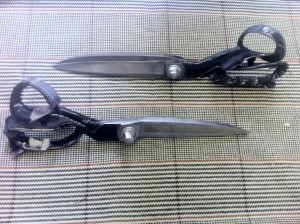 These are the most prized tool of the tailoring trade. The heavy, cold, sharp and alluring shears ( not scissors! ) are treated with the highest of respect.

There is an unspoken code amongst tailors, about their shears. Shears are precious, and so only the owner of their shears are allowed to use them. Yes, we tailors are also very precious! You will never, never see another tailor just casually walk over to another board and pick up the others shears and use them. It does not happen! There is a rule, that if you ask permission to use them, and the shear owner obliges, only then can you use their shears. But, rejection is always in the balance.

Often customers who spy his or hers tailors shears, often pick them up, exclaiming, ‘ oh they are so heavy!’ Then they go on to opening and closing the shears with a chomping action with abundance. While this is happening, their tailors shoulders are tightening, their smile turns to grimace and the repeated voice in their head is yelling, ‘please put them down, please-put-them-down!’ As the client puts the shears down, the tailors eyes release their drilling stare and a calmness ensues. Then often the tailor takes the shears and places them to the back of the board, far from reach.

Tailors often fret over where to get their shears sharpened. The thought of someone else handling them, undoing them and working them is a worry. The nightmare of them being lost in transit, damaged or stolen. Owning a pair of shears is a full time job, only to be taken seriously.

Tailors love their shears unconditionally. However, the feeling can be one sided! When cutting large jobs, heavy cloths, or just burning the candle at both ends, a tailors knuckles can become quite sore. In the photo above you will see that there are strips of cloth wrapped around the lower part of the handle. This is done to soften the rubbing on the knuckles caused by the cutting action of the shears. Next time you meet a tailor, take a subtle look at his/her middle knuckles, and see if you can see the hard flattened skin that is caused by the shears.

Now you know the rules.