Earlier this year Steven lent a three piece suit to The museum at the Fashion Institute of Technology. ( F.I.T ) It has been beautifully displayed, hiding the damages of moths and general aging. http://www.fitnyc.edu/13666.asp

The suit is from 1935 and actually made by Anderson and Sheppard. When Steven worked at Anderson and Sheppard, in 1995 A&S needed to clear some of their rails that were storing old suits, unwanted suits and pigs. ( suits that just didnt fit! ) The staff at the time were offered first choice of the rails, before the remaining suits were sent to the Salvation Army. http://www.salvationarmy.org.uk/

Steven saw the 3 piece tweed shooting shoot, and thought it very stylish. But when he looked inside at the name label, he couldnt believe his eyes! The label read P. Sheppard. Steven imediatley chose the suit, because he didnt want to lose such an important piece of history. He couldnt, and still cant quite believe that the suit nearly got given away.

The FIT were interested in the suit, because it is from the 1930’s. They are planning to host an exhibition next year, which will include this suit. 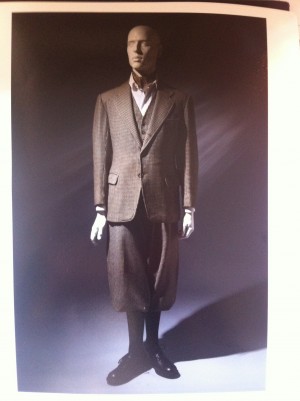