“Steven is the son of John Hitchcock, head cutter at Anderson & Sheppard, and he began as an apprentice coat maker there when he was 16.  At the time Steven thought he might work as a mechanic, but after getting a taste of the sometimes star-studded world of A&S, he thought otherwise.  After years learning his craft at A&S he set out on his own”…….

My friend Rose Callahan has just posted a lovely piece about my last visit to New York which I would like to share with you all here. 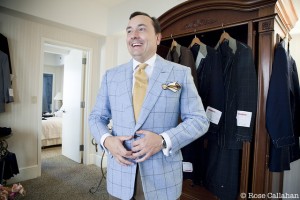